The Pullman Company built car No. 4527 in 1915. It was originally constructed as a 10-section, one-drawing room, two-compartment car. The original name of the car was the Shrewsbury. The car was built to Plan 2585C, part of Lot 4351, which was a lot of 20 cars.

This car was one of hundreds sold to the owning railroads, by the Pullman Company, following the United States v. Pullman Co. Antitrust lawsuit (1940-1947). No. 5139 was sold to The Southern Railway in 1948.

After receiving the car, Southern Railway sent the car to Hayne Car Shop in Spartanburg, South Carolina after September 1953. There, the car was again converted, from a Tourist Car to a Mail-Express car carrying the number No. 4527. After 1967, when the Post Office Department stopped running RPO cars, the car was converted to a straight baggage car.

During one of its conversions, the Southern Railway removed the standard concrete floor that defined this era of cars as “heavyweight cars” and replaced it with wood. It is assumed that this was done so that the car could carry more freight and baggage than it would have been able to with a concrete floor. When the concrete floor was removed, nothing was done to the trucks or suspension of the car to account for the reduced weight, therefore the car rides higher than other cars it is coupled with. 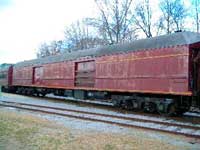 The No. 4527 was donated to the Heart of Dixie Railroad Club in the late 1960s. The car was refurbished as a Commissary Car and served the Museum for many years on steam excursions and other special event trains.