Built by General Electric sometime between 1903 and 1912, for the Semet Solvay's battery coke ovens. When built they came with 2 General Electric 57 traction motors and 1 K-6-A Master Controller. They were built for use at the Central Iron and Foundry Company's Empire Coke Plant, in Holt, Alabama. They were alternately known as trolley locomotives based on their usage of a catenary and trolleywire for power. 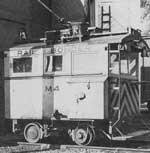 While they now have Steeplecabs, the two at the Museum were built with boxcabs. Sometime during the 1940s or 1950s, the cabs were changed. This was apparently done to accommodate the air compressors and reservoirs that were added to boast the braking power of the locomotives. As built, they did not have air brakes, but rather regenerative brakes.