Pullman Gallery Cars No. 7710 and No. 7715 were built by Pullman-Standard in 1960 for the Chicago and North Western Railway for use in the railroad’s Chicago-area commuter trains. The cars were part of a $21 million order for 116 bi-level cars equipped for push-pull service. The original road number of the No. 7710 while in C&NW service was No. 59, while No. 7715 was C&NW No. 64. The cars were re-numbered when Metra took over the operation of the C&NW commuter operations in 1978.

Chicago and North Western Railway’s decision to invest in a fleet of new bi-level commuter cars was a result of management’s determination to make operation of commuter trains profitable. The bi-level cars were a synthesis of several modern design innovations.

The center door design allowed for a much faster rate of loading and unloading passengers. This made for shorter station stops and thus faster schedules. These cars were designed for all electrical utilities (heating, air-conditioning, and lighting) to be provided by head-end power, rather than from a generator onboard the car itself. This saved space under the car which better accommodated the bi-level seating arrangement. It also saved about 10 tons in weight and simplified maintenance.

These cars were designed for push-pull operation, with several cars being equipped with a control cab. The C&NW’s terminal station in Chicago featured stub-end tracks which required expensive and time-consuming switching operations to turn commuter trains around. With the push-pull operation, a locomotive was included on one end of the train and a new bi-level car featuring a control cab on the other end, thus eliminating the need to turn the train set for the return trip.

Bi-level construction greatly increased seating capacity. However, much revenue was lost during short transit times when conductors had to make two trips through the car to collect fares – first on the lower level and then the upper. Conductors often did not have enough time to make it all the way through the train and thus many fares went uncollected. To alleviate this problem, another innovation was the gallery design of the seating area. The gallery design of the new C&NW cars allowed the conductor to make one pass through the car and be able to collect fares from passengers sitting on either the upper or lower levels.

The interior of car No. 59 (C&NW No. 7710) is essentially the same as when it was built in 1960. The goal of the interior design was to maximize comfort with minimal maintenance. C&NW claimed the interior could theoretically be cleaned with a water hose. The walls and ceilings were coated in an “easy-to-clean, scuff-resistant” vinyl bonded to steel. The window frames were also vinyl and featured rounded corners to facilitate cleaning. The interior color scheme was cream and cool blue. The five-foot wide windows featured a gradual tint and were made of heat-absorbing glass, eliminating the need for blinds or shades. The seats were covered with coral vinyl and were padded with foam rubber. Illumination is fluorescent with incandescent emergency lamps. 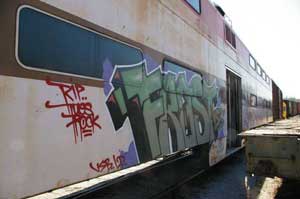 The cars feature girder construction and smooth sides. The trucks are type 41-HL-11 (CIB). While in C&NW service the cars were painted in green and yellow.

Chicago & North Western successfully operated No. 59 and No. 64 and their sisters until 1978, when the Regional Transportation Authority (RTA) assumed operation of the Chicago-area commuter trains operated by Chicago and North Western Railway. The commuter trains of the Chicago-area railroads were combined under the Metra system (Metra stands for Metropolitan Rail) which continues to provide commuter service in Illinois today.

Copies of the Metra newsletter, On the Bi-Level, were found inside No. 59 and No. 64. This indicated that the cars were still being used in Metra service as recently as February 2005, but were stored out of service in 2009. HOD Museum representatives traveled to Kansas City to inspect the cars and recommended the purchase of No. 7710 and No. 7715. The Heart of Dixie Board of Trustees voted to purchase the two cars in July 2009. After numerous delays and several phone calls, the cars finally arrived at the HOD Museum in February 2010.

Ex-Metra gallery car No. 59 being repainted to its original Chicago & North-western yellow and green livery.

HOD Museum volunteers spent several months working to ready No. 59 for use on the Museum’s annual North Pole Express. The volunteers reworked the air-actuated doors in the sides, replaced the green tinted downstairs windows with clear glass, replaced lighting ballasts and bulbs, then prepped and repainted the exterior of the car returning it to its original C&NW green and yellow scheme. The paint was barely dry before the car made its Calera & Shelby debut on the North Pole Express! Today, the car appears as it did on the Chicago and North Western in 1960, where it ran as No. 59.

C&NW Gallery Car No. 59 has seats of four that face each other and are perfect for families! The car is loaded by a center vestibule which separates the car into an "A End" and a "B End". During the North Pole Express, C&NW "A" is where our live entertainers perform! The upper gallery seating sections are not available during the North Pole Express event, although it is available during some other events.