The SW1 was the second generation of 600 hp switchers from EMD. It succeeded the SW and SC. The use of EMD’s own engine design, the EMD 567, was the most significant change from the SW and SC models. SW1s were built between December 1942 and November 1953. Final assembly was at EMD's plant at LaGrange (McCook), Illinois. Despite a War Production Board suspension in diesel production from 1942 and 1945, EMD managed to produce 661 locomotives of this design.

As Memphis station’s lone switch engine, known as “the ten-spot,” it proved up to the task. Any changes in a train’s consist was handled by #10. On its final day of operations – in addition to its normal duties - No. 10 was also pulling all of the spare passenger cars out of storage and placing them on the ends of outbound trains or in strings to be picked up by their owners from the ready tracks.

When MUS ceased operations in 1964, No. 10 was sold to Republic Steel where she was renumbered as No. 904 and operated in Thomas, Alabama until the plant shut down in 1984.

In 1989, a Heart of Dixie salvage crew went to work making her operational once again. Prior to joining the Heart of Dixie roster, she actually spent a few weeks pinch-hitting for American Cast Iron Pipe Company (ACIPCO) while their engines were down. After that, she was brought to the museum's Powell Avenue site in Birmingham, Alabama. 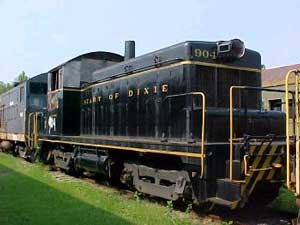 In the fall of 1989, the engine was painted and lettered as Louisville & Nashville No. 11 and was used for photo sessions at the Boyles Roundhouse for the L&N Historical Society Convention. The following year, she was again repainted and lettered as engine No. 904 of Heart of Dixie's Calera & Shelby Railroad (C&SRR). The engine remained in good operating condition until sometime in the mid-1990s. For reasons unknown, vandals or vagrants started a fire in the cab. This resulted in a catastrophic loss of the operating controls.